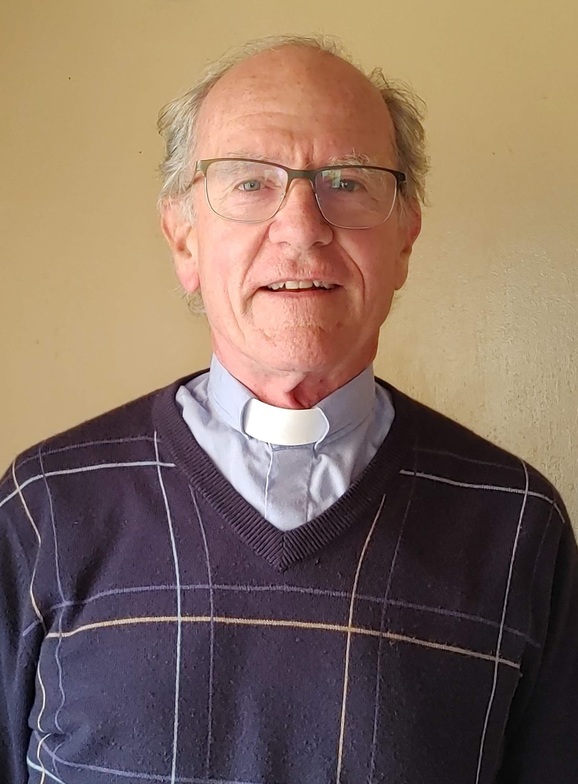 The peace and grace of Christ be with you.   As we begin what promises to be a relatively brief interim time, I wanted to let you know a bit more about your new Interim Priest-in-Charge.

As I preside at your holy table, and we celebrate together “the Lord’s death until he comes,” we constitute the sacred body of Christ, whether we are strangers or long-time sisters and brothers.  The Anglican parish counts among its many strengths a “relational” style of shared ministry.

Our relationship is stronger, deeper, and more resilient as we come to know each other better.  For that reason I want to give you a bit of a head start in knowing who I am.

I was about 13 years old when I was sitting in St. John the Baptist Colwood one evensong, the only person present younger than my parents.  The sermon the Rev. Don Hatfield preached was on Matthew 25, “Go into the world and preach the gospel to everyone, and baptize them in my name…” In my mind, the rest of the congregation were all too old to respond to that call!  I concluded that the sermon was directed at me personally, and that was the beginning of my sense of the Divine Call to priesthood.  After years of waffling and resisting, with many people along the way convincing me and encouraging me, I became a postulant for ordination.

As a young boy growing up at (and in!) Glen Lake, I became a competitive swimmer, and a lifeguard.  I spent three summers at Camp Columbia as a lifeguard, and in the summer of 1964 my assistant was Marion Lonsdale of Chemainus.  We were engaged at 19, and married at 21.  Camp was one of the places where my vocation was affirmed, and I learned that joy, enough to overcome the real struggles of living honestly together, was a hallmark of the people of faith.

I had the good fortune of growing up with two parents around all the time.  This was not the case for my two older brothers.  The eldest was nearly seven, and the next three months old, when my father left for World War II.  He was gone for nearly seven years.  There was a great deal of stress between them and my father, which lasted all their lives.  But my childhood was very blessed, living on the lake, raised on goat’s milk, fresh eggs, home-made bread, and home made beer.  Brewing good ale has been a Parker tradition that continues to this day.  We were fortunate that our parents had no propensity for problem drinking.  I brew a good rich stout, a mildly hoppy IPA (I grow my own hops), a tasty English Bitter, and a couple of other ales.  (Apologies to the lager lovers, I don’t brew any lager!)

Since third grade I have always had a bicycle.  My riding was mostly recreational, until, in Campbell River, my little second car died, and my teenage son challenged me to ride a bicycle instead of driving a car everywhere in my parish ministry.  Since then I have been a full-time commuter cyclist.  I am not as speedy as I used to be, but it is still often quicker to ride around Victoria than it is to drive.  I am grateful that unlike Campbell River, Victoria was not built on a hillside.  So far I have resisted all calls to equip myself with an E-Bike.

My parents made provision for us to have piano lessons at home.  Music has been part of who I am since childhood.  I played clarinet in high school band; the guitar became part of my life at  Camp Columbia.  Choral singing began at UVic (St. Mary’s Oak Bay all male choir, and the UVic Chorus.)  When children were no longer in need of babysitters, Marion and I joined the Campbell River Singers (a night out a week!  Yay!) and I became a founding member of Island Voices Chamber Choir.  After moving to Victoria I joined The Linden Singers.  (For that reason, when September comes, I will not be available on Wednesday nights, Linden’s rehearsal night.)

My father was very good with his hands, doing fine crafts to support himself after the war.  My high school shop teachers were excellent.  I have always enjoyed using my hands, especially for woodwork.  I would call myself an artisan woodworker, and have managed to sell enough woodwork to equip my workshop.   I was once given a poster, which has long since disappeared, but said with a clear humour, “My boss is a Jewish Carpenter.”

In the early years of my ministry, we saw the Charismatic Renewal breathe fresh energy (and no small amount of controversy) into this Diocese.  As a priest I learned many valuable lessons from that time.

Early in my time in Parksville, I began to hear disclosures of childhood sexual abuse from women.  These stories were hard for me to hear.    After a few years of working closely with social services, I was able to be part of the first Sexual Abuse Support Services organization in Parksville.  In Campbell River I was founding Chair of the Board of the North Island Survivors’ Healing Society.  I remain grateful to scores of women who have trusted me and taught me of this reality, which sadly is as prevalent today as ever.

I have lived through the struggles of the Church with issues of the ordination of women, liturgical renewal, and sexual orientation.  Through these struggles I wrestled, like most of us, with what it means to live out the love of Jesus for all people.

I have always had a deep love of the land, the forests, the waters and the creatures that surround us. Whenever I have met or worked with First Nations peoples, I have felt a kinship with them, and with their deeply spiritual relationship with the environment.  I believe the healing of our environment will be enriched and hastened by the healing of our relationship with First Nations across Canada.

At Camp Columbia I discovered canoeing, and to this day paddling my canoe on the ocean is one of my favorite activities.  Spinal Stenosis and the weakness it causes in my ankles makes portaging a bit problematic, but I am fortunate to be able to continue canoeing and cycling.  You may see me limp or stumble momentarily from time to time.  Please don’t be alarmed.  It is chronic, non-operable stenosis, and I am learning to live with it.  Finally, just in case you’re wondering, we are triple-vaxxed, and we have both had a mild bout of COVID 19.  We continue to be cautious in public, and I will be respecting the Diocesan COVID protocols with care.