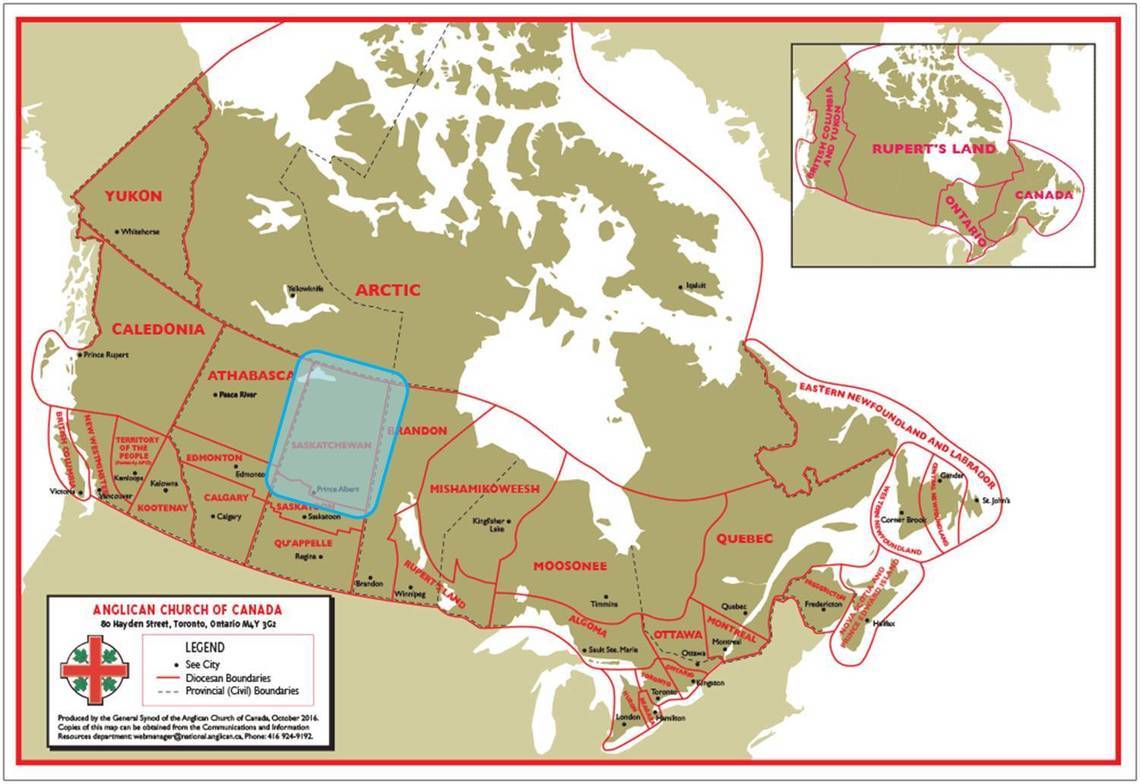 image: The Anglican Church of Canada's map of Canadian dioceses and provinces, from anglican.ca (modified to highlight the Diocese of Saskatchewan)

In the week of 21 August 2022, in the Anglican Church of Canada's cycle of prayer, we pray for The Rt. Rev. Michael Hawkins, Bishop; The Rt. Rev Adam Halkett, Suffragan Bishop, and the clergy and people of the Diocese of Saskatchewan.

From the diocesan website: " The Diocese of Saskatchewan serves the northern two-thirds of the civil Province of Saskatchewan - an area about twice the size of Germany. In this area there are 68 scattered Anglican congregations grouped into 32 parishes. Missionary work began formally in the 1850s, and it became a Diocese with its see at Prince Albert in 1874. Its Anglican population is about 23,000, sixty per cent of whom are Cree indigenous people. At least half of these are under the age of 25.

"The Diocese has 25 active and 15 retired clergy, two catechists, 110 lay readers, and two bishops. The majority of the active clergy are non-stipendiary. The Bishop of Missinippi, or Diocesan Indigenous Bishop, Adam Halkett, was consecrated in 2012 as part of a vision called ᒫᒪᐃᐧ  ᐃᓯ  ᒥᔮᐧᒋᒧᐃᐧᐣ mâmawi isi miywâcimowin – Together in the Gospel.

"The Diocese is one of the 30 dioceses of the Anglican Church of Canada and belongs to the ecclesiastical Province of Rupert’s Land. The Diocese is also a proud member of the Council of the North and receives almost half of its annual funding from grant given through that Council.

"Holy Trinity, Stanley Mission, was the diocese's first church. Built in 1854, it is the oldest building in Saskatchewan and the oldest church in Western Canada.

Here is an introduction to the history of the diocese.

Here is a list of the parishes across the diocese.

The diocesan cathedral of St Alban is in Prince Albert. The joint diocesan newsletter of Saskatchewan, Saskatoon and Qu'Appelle is the Saskatchewan Anglican, available here.